Serve And Volley Opponent: 5 Tips To Beat Them Today!

Playing against a serve and volley opponent can be quite difficult, especially if your opponent has a lot of experience playing with this tennis tactic. Of all the tennis tactics, the serve and volley style is often one of the hardest to beat, and you will be under a lot of pressure when the player plays using these tennis tactics. While the number of opponents playing this tactic is few, you may still find yourself up against one of these players. If so, here are five things to keep in mind:

Be patient. The downside to the serve and volley tennis tactics is that it is much easier to make a mistake, and the openings left in their guard will be easy to take advantage of if you can hold out for the first few volleys. Don’t try and hit a big shot with each swing, but wait until you have the perfect chance for a passing shot against your opponent. You will make mistakes if you try to hit passing shots every time, and you need to keep in mind that the game isn’t won on the first shot. Look for the openings your opponent will give you, and be wary that you don’t give your opponent any freebies. 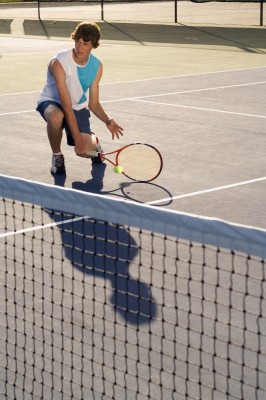 Be wary of the serve, as most serve and volley players have an excellent serve. At least block the ball back if you aren’t able to return the serve, as that will help to relieve some of the immediate pressure. Try and aim the ball down the line or at your opponent’s feet if you are going to shoot low, and try to avoid crosscourt shots that will end up being too slow to get past your opponent. Advanced players may be able to drive back the return by stepping into the serve, but this can be quite difficult. However, if you can pull it off, it will force your opponent to hit his first volley further into the court than they prefer.

Lobbing the ball over your opponent’s head is a great way to counter his tactic, as it forces him to hit over his head defensively. It also lets your opponent know you are willing to send the ball high, which will make him reconsider his decision to get too close and may prevent him from actually closing into his desired spot. It doesn’t matter if your lob gets slammed, as it still gives your opponent a heads up that you are willing to lob.

Watch them carefully to determine what their weaknesses and strengths are. Every player has a weak point that can be taken advantage of, and the best way to beat a serve and volley player is by using his weaknesses to force him back from the net. Always force them to play on their weak side, and watch how they respond to knee shots, ankle shots, and high shots.

Make sure that you are in control of the number of times they come to the net. Your serve can force the opponent to stay at the baseline unless they are willing to chip and charge, so try to keep the player back as long as possible. Make sure that your ground strokes prevent them from getting off approach shots by landing deep in the court, and do whatever you can to throw off their serve. If you can stop them from getting to the net and get there yourself, you can turn their tennis tactics against them and use the serve and volley tactics to win.