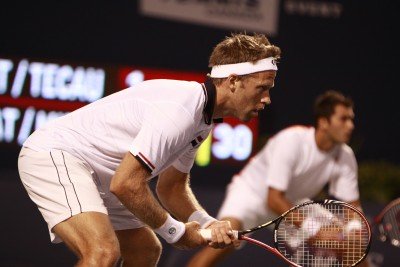 Adopting effective tennis doubles strategy during the course of your doubles game can result in a far more enjoyable and successful playing experience. Playing your game with a deliberate focus on proven and effective techniques makes you and your partner a more formidable force to be reckoned with.

Box your opponents in and close in on the net while preventing them from doing so. Aim your shots low, which will force your opponents to lift the ball from below the top of the net. It's helpful to compare doubles to a game of volleyball, where a rally is concluded with a forceful spike close to the net.

When you're positioned deep in the court, target the opponent who is furthest away from the net. Alternatively, target the player who is nearest to you when you are close to the net and in a position to hit the ball downward with significant force.

Identify The Weaknesses Of Your Opponents

As you identify and exploit the weaknesses of your opponents using effective tennis doubles strategy, you force them to make shots that play into your strengths. Aim your shots between them, making sure as best you can that the ball is never within comfortable reach.

Also, aiming your shots between your opponents may lead to hesitation and confusion on their part with regards to which of them should play the shot. Aiming shots at your opponent's feet is also a good tactic. You will most probably receive a return which is easy to deal with, if your shot is returned at all.

Be Encouraging, Focused And Accurate

Be certain to encourage your partner as part of your healthy tennis doubles strategy. Few things can ruin your doubles game like a breakdown in communication between you and your partner.

Aim to maximize the surface area of the court when playing down the line or crosscourt. Since you are playing doubles, you have more court surface to work on. Every additional inch that your force your opponent to move can work to your advantage.

Your priorities when making your shots should be as follows: 1. Keep the ball in play 2. Avoid the net player, unless you are close to the net and able to aim for his or her feet 3. Force the server to play a low volley or half-volley, thereby maximizing your chances of winning the point.

There is no reason why a game of doubles tennis should not be simultaneously enjoyable and effective. These kinds of strategies help to ensure that both objectives are achieved.