Left-Handers: How To Overcome Them?

There is no doubt that left-handers have a natural advantage in tennis. I know because I am one myself. Many of our shots catch our opponents off guard. And when our opponents think they have made a put-away shot, they find the ball sailing right back at them, an easy stroke for the left-handers. Changing your general tactics and approach to the game will be necessary if you are to succeed. 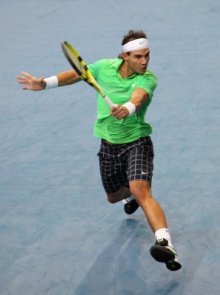 Although there are far fewer left-handed tennis players than right-handed ones, they play a tough game and seem to rank very well. Nobody enjoys playing against a left-handed player because so many shots go to their forehand instead of backhand. They are able to force you to play back-handed much more than you probably want to.

Some of the most famous left-handers we have known are John McEnroe, Jimmy Connors and Rafael Nadal as well as Martina Navratilova, Iveta Benesova of the Czech Republic and Monica Seles.

In order to overcome the unfair advantage lefties have on the court, here are a few tips that I want to share with you:

• It is very likely their serve will have a left-spin to it, so be prepared

• It is also very likely (my favorite strategy) the left-handers will use slice serve when they are serving from the left side (ad court). So be prepared to return the serve with your backhand or run around to your forehand side if the serve is not fast.

• Try to hit your forehand crosscourt and your backhand down the line; that will keep them stretching for backhand swings

• If you are serving from the ad court, try serving down the center of the court

• Serve as wide as you can to the left-hander’s backhand when you are at the right side of the court (deuce court), and if you can slice the ball so it spins away, so much the better

One of the best ways to overcome left-handers is to watch them play, and play against them. It is really through experience of how they react to your shots, and how you react to their ability to volley far longer than right-handers at times that will finally give you an edge over them.

Check their strategy. Do they tend to aim for certain places on the court more frequently than others? Do they have a particular shot that always seems to be a winner? This can indicate their strength and speed wins out or just that the opponent is vulnerable to that oncoming shot. Watch for a pattern in their service strategy. Is it targeted or random? Do they like to play the net, or do they stay back? These observations are useful whether you are up against a left-hander or right-hander, but you need to be more vigilant when watching a left-hander since things will play out differently on the court.

One thing you have considerable control over is your emotions. Don’t psych yourself out thinking you won’t be able to keep up with the left-hander, after hearing so much about their superior game. This will only make you a nervous player and give them a greater advantage. Stay cool and focused.