Tennis footwork is a major part of your game. You’ve got to intuitively get your stances right because they have so much to do with balance and shifting your weight in the right direction to make your best shots. With sharp clean foot moves, you will get to the ball early and prepare well for the shot.

Before we take a look at the main hitting stances and how they can improve your game, I have a very solid piece of advice to share with you. It is a golden rule in tennis. Promise me you will never, ever stand on your heels on the tennis court. Don’t stay rooted to the court. Be on your toes at all times. Got it? Good!

Today’s modern groundstroke game incorporates a few footwork stances. These stances as described below are to illustrate the way you stand during the shot.

This tennis footwork is very popular lately thanks to tennis stars like Venus and Serena Williams. Venus particularly loves the open stance two handed backhand. Andy Roddick and Rafael Nadal are also famous for their open stance. To do it, you will coil your upper body sideways to the ball. However, your lower body is still facing the net. This coil between the upper and lower body creates torque that can be used as additional energy for hitting the ball. Much like a spring that has been wound, the upper body literally springs open. When done correctly, this energy is passed on to the racket when hitting the ball. 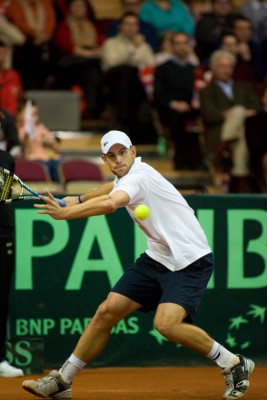 This step is also known as the square stance – possibly because your feet pretty much form a 90 degree angle to the baseline, making a T-square with the baseline. You stand center court on your baseline and move your left foot slightly forward when you hit the ball, then your right foot moves up to help you recover and return to ready position. This is not a big step but a very effective one. 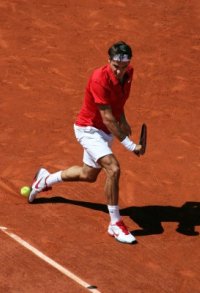 The closed stance can be used for both forehand and backhand shots. Many coaches don’t like the closed stance forehand and discourage their students from using it. The reasons are because the stance leaves you off balance if you are moving into a forehand shot and counterproductive for players wanting to generate power. You wouldn't want tennis footwork that is counterproductive right? In closed stance, your feet are both facing to the right or left of the court, and your front foot (opposite to your racquet holding hand) crosses over your rear foot at a sufficient angle that your body is closed off from the court. It takes extra steps to open up again for the next shot. The one handed backhand is probably the best time to get into a closed stance because you need to get into sideways position to execute the stroke.

I advise you to develop fluid tennis footwork. It’s possible to use all the stances when you play, even if you have a personal favorite. It’ll astound your opponent when you are effortlessly able to move all over the court in a matter of seconds. Lastly, I have a quick tip to share with you when you are watching videos of professional players playing. Many of us tend to watch how they hit ball and admire their beautiful strokes. Next time when you are watching, spend about 5 points watching how they move instead, i.e. look at their legs and learn how they move. I am sure you will take away some learning points from their superb footwork.