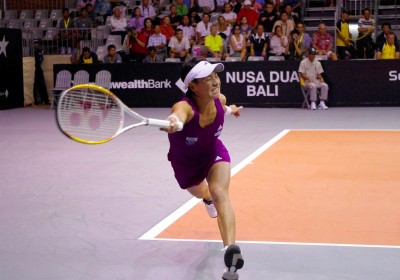 When it comes to playing tennis effectively, it is important to master a number of basic techniques which are vital to crafting a winning game. Besides the forehand and backhand groundstroke which I dedicated two navigation buttons for them, let me briefing explain the other core techniques that you should learn. Like various colors at an artist's disposal, the more techniques you have under your belt, the more tools you have available to turn every point into a winning one.

The serve – The serve is one of the fundamental strokes in the game of tennis. In my opinion, it is also one of the hardest skills to master. The serve is the shot that starts off each point in the game, and it involves the serving player hitting the ball diagonally across the court so that it lands in the service box close to the net, on the opposite side of the court.

The volley – In the volley, the player hits the ball before it bounces. You will usually do that you are positioned between the net and mid court.

The Lob – The lob, often played with a measure of topspin, may not be played very often, but it can be a very effective point-winner. The lob involves hitting the ball high into the air, over your opponent's head, when he or she is close to or moving close to the net. When timed and executed well, the lob can be an incredibly difficult shot to return.

The smash – This is a very exciting technique because if you do it well, the chance of winning the point is very high. You use the overhead smash to counter a lob, either before or after it bounces. The motion for the overhead smash is similar to that for the serve. However, the ball is hit with an abbreviated backswing.

Approach shot – This shot is utilized when playing tennis when the intention is to approach the net immediately after making the shot. It is designed to force one's opponent into a vulnerable position that makes them return the ball with either more elevation than usual, or less pace, thereby making it easier for you to play a winning shot from a position close to the net.

Passing shot – This is the answer to a player approaching the net. You either hit a lob or a passing shot. In order to execute this shot well, your control of direction must be good.

Drop shot – You often see it in clay court matches. It is a shot which is intentionally hit very short in the opponent’s court. An important element of the successful use of the drop shot is surprise and disguise.

Half volley – This shot is played when the ball is being hit to you at your feet as you approach the net. The half volley occurs when you contact the ball immediately after the bounce.

The techniques covered here are just a sample of those that are used in the game of tennis. Trust me, as an increasing amount of these techniques are learned and mastered, playing tennis will be a joy and I am sure you will look forward to hit the courts every time.