If you are an intermediate tennis player with big dreams to improve your tennis game, then I suggest that you start working hard on your tennis serve stance. Your tennis serve, and more importantly its successful execution, will be heavily impacted by what serve positions you choose and then end up incorporating into your routine. Basically, there are two different kinds of suitable serve positions that players can choose from. There is the pinpoint stance, and there is also the platform stance. Each of these two different stances comes with its own number of advantages as well as disadvantages. Read on to find out the advantages and the disadvantages of each one.

The pinpoint serve stance is where your feet are at most only a couple of inches away from each other. Some tennis players even go into this stance with both of their feet basically touching. Tennis players like Gael Monfils as well as Andy Roddick commonly use this type of tennis serve stance. It must be noted that there are possible variations to the pinpoint stance. For instance, the hybrid pinpoint stance demands that players begin in a platform stance with feet apart a little bit wider. On the motion to the trophy position, they then slide their back foot up beside their front foot and into the pinpoint stance. Examples of the many players that use the hybrid pinpoint stance are Tomas Berdych and Andy Murray. 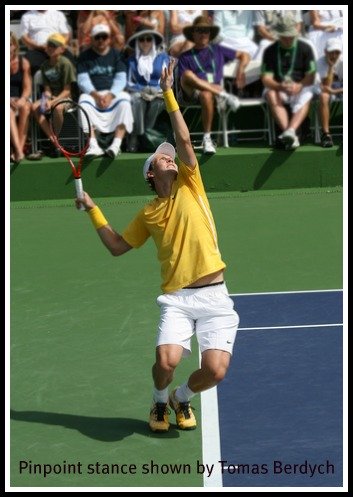 The advantage of the pinpoint stance is definitely explosive speed and power. With this stance, tennis players will be able to more easily explode up and into the tennis ball during their tennis serve. This has to do with the fact that their feet are closer together for this stance. As you hit the tennis ball, you will come up just a little bit higher, which will allow you to obtain a little bit greater power, too.

The disadvantage with a pinpoint stance such as the hybrid pinpoint stance is that more of the body is in motion. Thus, it is far more troublesome to perfectly time the serve, and it is also less easy to be in full control of the ball toss and your balance throughout this movement. There is also a risk of foot faulting when you bring your back foot to the front.

The platform serve stance is characterized by feet that are approximately a shoulder’s width apart. Your feet’s angles vary, and the feet must remain the same width apart when you are serving. The only movement of the feet occurs when you jump up off the ground. Examples of tennis pros who used the platform stance are Roger Federer, Novak Djokovic and the retired tennis player Pete Sampras. 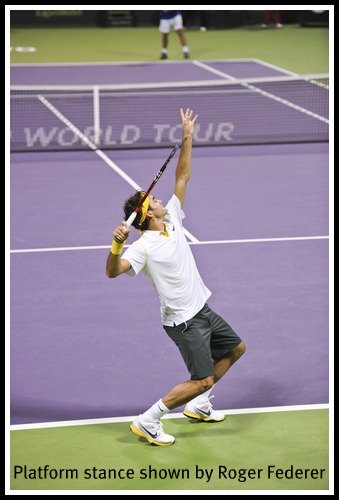 The advantage with the platform stance is that your weight transfer to the front will be much more stress-free when you go through the motion. This has to do with the fact that your feet are wider apart for this tennis serve stance, meaning that it is going to be lots easier to move all the body weight to your back foot before moving the weight to the front foot. The platform stance also seems to allow greater body coil on the back swing providing more angular momentum through contact. Another advantage is that you also do not have to worry about foot faulting when you adopt the platform stance.

The platform stance requires that you make a small adjustment when you serve, all based upon whether you are serving to the deuce or the ad court. Basically, what you want to do is slightly adjust the angle of the position of your body based upon whether you serve to the deuce or the ad court. Both tennis serve stances are used effectively by top pros. There is always a debate as to which one is most preferred and advantageous to the student.

As a tennis coach, I personally prefer players to adopt the platform stance because your balance will be better and therefore your serve will be more consistent. As for the pinpoint stance, you need to have good body control in order to contact the ball consistently. You can try both tennis serve stances and decide which one is more suitable for you.