The list of tennis terminology that is associated with the game can be quite expansive. The game of tennis has been around for centuries, and it is useful to get to grips with some of its common terms in order to understand it better.

Ace: Refers to a valid serve that is the opponent is unable to make contact with. Aces are typically hit very powerfully, often bouncing on or very close to either of the corners at the back of the service area or box. Put it simply, having more aces in your game mean having more free points!

Advantage: When a player wins the point immediately following a deuce, and needs only one more point to win the game, that player has the advantage. This term is not applicable in a tie-breaker game.

Approach shot: This is a tennis shot that is utilized as a set up when the player using it runs up to the net. This shot typically uses topspin or backspin/underspin. 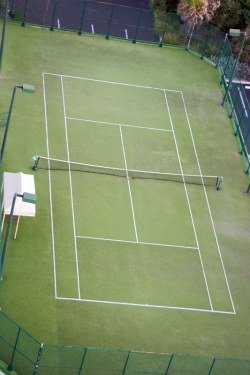 Backhand: A shot as defined in tennis terminology by which the ball is struck with the back of the racquet hand facing the approaching ball at the moment of impact. A backhand is typically hit by a right-handed player at times when the ball is to his or her left-hand side, and vice versa.

Backspin: Refers to a shot that causes the ball to rotate backwards after impact. It is also referred to as underspin or a slice. The flight of the ball through the air is impacted by an upward force known as the Magnus Effect.

Block: A defensive stroke that involves relatively little backswing. It is typically used when returning a serve or when playing a shot while standing close to the net.

Crosscourt: Defined in tennis terminology as hitting the ball diagonally towards the opponent's side of the court.

Fault: This term is used in reference to a serve that lands outside of the proper area of play, resulting in the point not starting/being played.

Forehand: The opposing shot to the backhand, a forehand shot involves the player hitting the ball with the front of their racquet hand facing the approaching ball.

Match Point: The scenario when the leading player requires one more point in order to win the match. It can also be called championship point if the match happens to be the final match of a championship.