Tennis Drill To Improve Your Kick Serve and Toss

The tennis serve toss and the kick serve are two difficult components of the serve.In today’s lesson, I am going to share a powerful tennis drill that can improve your serve toss and kick serve.

Learn This Powerful Tennis Drill To Improve Your Serve Toss and Kick Serve.

Benefits of the Kneeling Serve.

Before I start demonstrating how to execute this tennis drill, let me explain two reasons why the kneeling serve is so important and powerful.

1) When you are in a kneeling position or in a seated position, you have eliminated your lower body in the equation. So, in order to serve the ball over you have to toss at a consistent spot. I have seen players tossing all over the place and they need to walk to the ball and hit the ball. That really defeats the purpose of the good toss. Therefore, this exercise forces you to toss the ball well, so that you can contact the ball.

2) The second reason is more about the mental image. When you are sitting down or kneeling down, you become shorter and net becomes higher. This will force you to brush the ball up instead of thinking of snapping the ball down. So when you are shorter, you have to think of a way to hit the ball up so that the ball can go over the net.

With these two reasons, this tennis drill is super powerful when it comes to developing your kick serve and the toss.

You can bring along a towel when you practice the kneeling serve because I need you to do a half serve in a kneeling position. If you have a problem with the knees and you cannot kneel down, don’t worry about it. I am going to show you a seated version as well. 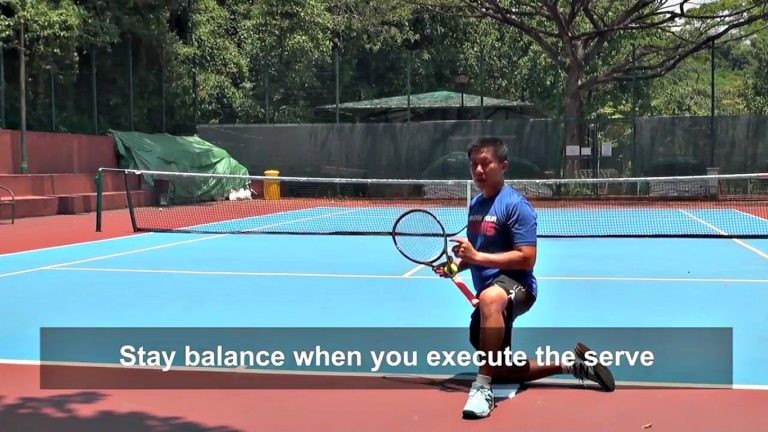 You can also practice your serve in this position.

The next thing is we are going to do a half serve. You can choke up the racket and start with the racket behind the head. We are going to focus on the toss. Toss the ball slightly behind us so that we have an angle to brush the ball over. 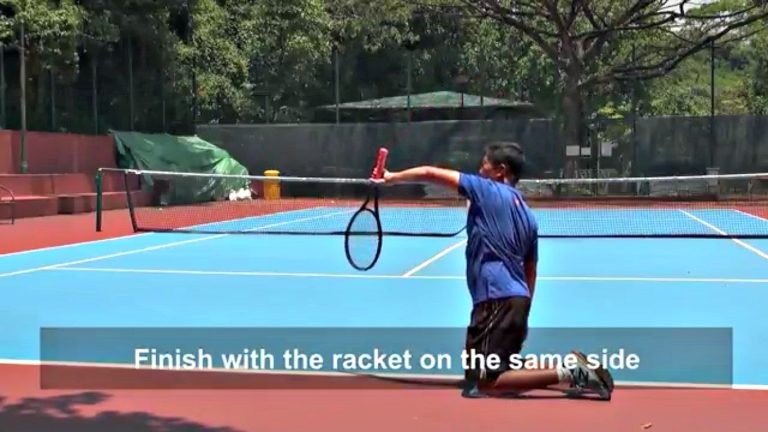 Let’s try the first serve as shown in the image below. Just remember to toss the ball behind the head. And the next thing is the mental image "I want the ball to clear the net."

So, I must hit the ball up first. 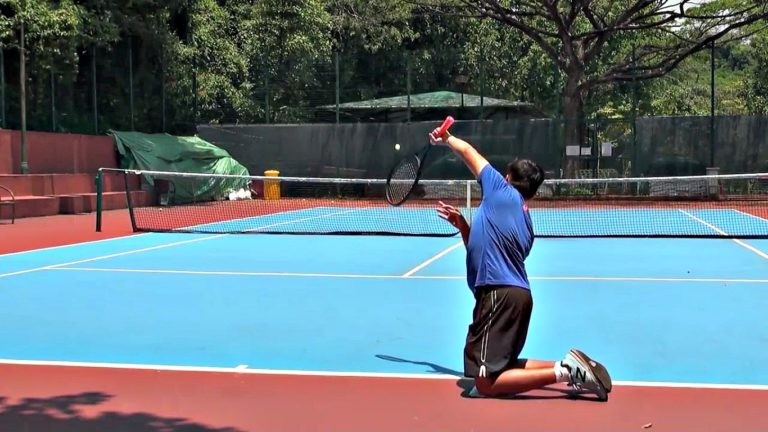 Demonstration of serve in a kneeling down position

Imagine, if you are doing a full serve with that kind of angle and spin, your kick serve is definitely going to kick up a lot higher. And this is going to bring trouble to the opponent.

The Alternative To Kneeling Serve: The Sitting Serve.

The next version that I am going to show is the seated version. If your tennis court has a chair you can just pull it and place it behind the baseline.

In the seated position, I am sitting on the edge of the chair so that I have space to maneuver. Let's practice whilst focusing on the half serve, tossing behind the head and brush the ball high. 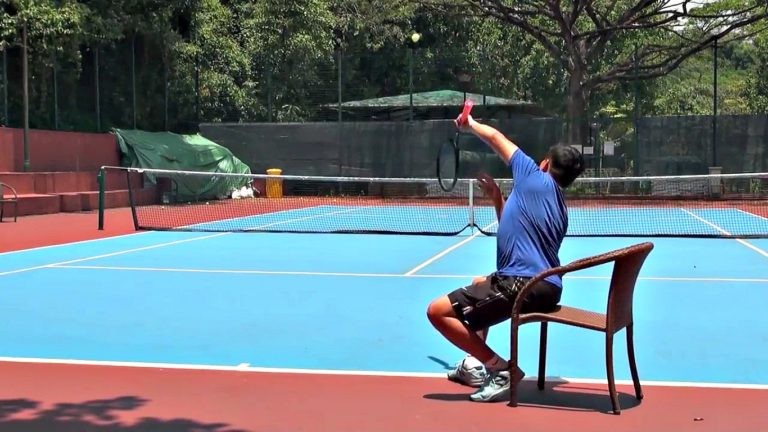 Demonstration of practicing serve in the seated position.

After you have worked on the kneeling serve or the seated serve, the next part is to work on the serve in the standing position. Just like what we have worked on the toss as well as hitting up motion. If you apply these two things in your full serve, you will see more consistency in your toss and more kick in your serve.

However, if you are still learning the serve, my suggestion is to go for a half serve first before you go into the full serve. Work towards a consistent toss and hitting the ball up before you progress to a full serve.

Let me know your results after implementing the tips. I really look forward to hearing from you.