Tennis Rating: How Good Is Your Tennis?

Have you ever wonder what is your current tennis rating?

If you just started learning tennis, you are probably trying to consistently hit the tennis ball over the net and stay ‘alive’. You might be taking lessons from a tennis coach and every session, your coach teaches you how to hit forehands and backhands and practice with baskets and baskets of balls.

What about those who are already playing socially and not taking any lessons? You have a weekly gathering at your favorite tennis court and you play with your friends for two hours. A great workout! However, if you are seriously thinking of improving your tennis skills, you are not sure which direction to go.

How do you know where you are right now? How to get to the next level?

What is the next level by the way?

Find Out Your Tennis Rating With NTRP

Now, this rating system is not created by me.

The United States Tennis Association uses NTRP ratings to rate the players based on skill level.

Besides knowing your level, what are the other benefits in using NTRP?

I have categorized the benefits for the different groups of people:

Knowing your NTRP helps you to find players of similar levels to play with. Imagine a 4.5 player playing with a 2.0 player. I think the 4.5 player will end up coaching the 2.0 player than playing.

You definitely want to improve your tennis and win more matches right? Knowing your current level will give you an indication what is the next level to work towards.

You can also play with someone who is .5 level higher than you so that you can gain exposure to high-level players.

I think we are accountable to our players’ progress. But how do we reflect this accountability? Well, we can verbally tell them, “Your forehand has improved.” or “You need to work on your backhand more often.” Instead of giving vague feedback, show them the rating program, assess them and give them a rating.

From the rating, the player now knows that he/she needs to gain certain skills in order to get to the next level.

Formulate training program based on the players’ level. When the player and coach know the direction to go, the coach is able to plan every lesson with a specific purpose.

NTRP ratings are used for adult players or youths playing in an adult USTA competition. Some countries are using the rating as well. The ratings are divided into levels between 1.5 and 7.0. Unlike a Junior NTRP rating, the scale increases in .5 increments.

A player with a 1.5 NTRP rating has had limited experience with stroke development and is still working primarily on getting the ball into play and is not yet ready to compete. By contrast, a 3.0 player is fairly consistent when hitting medium-paced shots but is not comfortable with all strokes and lacks execution when trying for directional control, depth, pace or altering distance of shots.

At the top end of the rating spectrum, a 6.0 player typically has had intensive training for national tournaments or top-level collegiate competition and has obtained a national ranking. The 6.5 and 7.0 are world-class players.

So want to know the exact breakdown of each level?

This player has limited experience and is still working primarily on getting the ball into play.

PLAYING STYLE: This player needs on-court experience. This player has obvious stroke weaknesses but is familiar with basic positions for singles and doubles play.

PLAYING STYLE: This player is learning to judge where the ball is going although court coverage is weak. Can sustain a short rally of slow pace with other players of the same ability.

BACKHAND: Grip and preparation problems; often chooses to hit FH instead of BH

SERVE/RETURN OF SERVE: Attempting a full swing; can get the ball in play at slow pace; inconsistent toss; can return slow paced serve

VOLLEY: Uncomfortable at net especially on the BH side; frequently uses FH racket face on BH volleys SPECIAL SHOTS: Can lob intentionally but with little control; can make contact on overheads 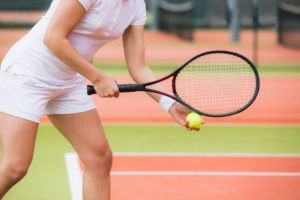 PLAYING STYLE: This player is fairly consistent when hitting medium paced shots, but is not comfortable with all strokes and lacks execution when trying for directional control, depth, or power. Most common doubles formation is one-up, one-back.

SERVE/RETURN OF SERVE: Starting to serve with control and some power; developing spin; can return serve consistently with directional control on moderate shots

SPECIAL SHOTS: Consistent overhead on shots within reach; developing approach shots, drop shots; and half volleys; can place the return of most second serves

PLAYING STYLE: This player has dependable strokes, including directional control and depth on both forehand and backhand sides on moderate shots, plus the ability to use lobs, overheads, approach shots and volleys with some success. This player occasionally forces errors when serving. Rallies may be lost due to impatience. Teamwork in doubles is evident.

FOREHAND: Dependable; hits with depth and control on moderate shots; may try to hit too good a placement on a difficult shot

BACKHAND: Player can direct the ball with consistency and depth on moderate shots; developing spin

SERVE/RETURN OF SERVE: Places both first and second serves; frequent power on first serve; uses spin; dependable return of serve; can return with depth in singles and mix returns in doubles

VOLLEY: Depth and control on FH volley; can direct BH volleys but usually lacks depth; developing wide and low volleys on both sides of the body

SPECIAL SHOTS: Can put away easy overheads; can poach in doubles; follows aggressive shots to the net; beginning to finish point off; can hit to opponent's weaknesses; able to lob defensively on setups; dependable return of serve 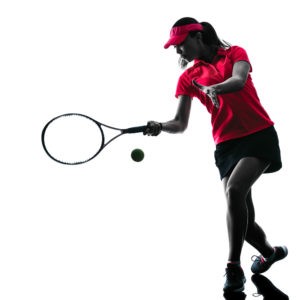 BACKHAND: Can control direction and depth but may break down under pressure; can hit power on moderate shots

VOLLEY: Can handle a mixed sequence of volleys; good footwork; has depth and directional control on BH; developing touch; most common error is still overhitting

PLAYING STYLE: This player has good shot anticipation and frequently has an outstanding shot or attribute around which a game may be structured. This player can regularly hit winners or force errors off of short balls and can put away volleys, can successfully execute lobs, drop shots, half volleys, overhead smashes, and has good depth and spin on most 2nd serves.

BACKHAND: Can use BH as an aggressive shot with good consistency; has good direction and depth on most shots; varies spin

SERVE/RETURN OF SERVE: Serve is placed effectively with the intent of hitting to a weakness or developing an offensive situation; has a variety of serves to rely on; good depth, spin, and placement on most second serves to force weak return or set up next shot; can mix aggressive and off-paced service returns with control, depth, and spin

SPECIAL SHOTS: Approach shots and passing shots are hit with pace and a high degree of effectiveness; can lob offensively; overhead can be hit from any position; hits mid-court volley with consistency; can mix aggressive and off-paced service returns

This player can hit dependable shots in stress situations; has developed good anticipation; can pick up cues from such things as opponent's toss, body position, backswing, preparation; first and second serves can be depended on in stress situations and can be hit offensively at any time; can analyze and exploit opponent's weaknesses; has developed power and /or consistency as a major weapon; can vary strategies and style of play in a competitive situation.

The 6.0-player typically has had intensive training for national tournament competition at the junior and collegiate levels and has obtained a sectional and/or national ranking. The 7.0-player is a world-class player.

So now you know about this tennis rating system. I have specially prepared a template for you to rate yourself and categorize whether you are a beginner, intermediate or advanced player. If you are a coach or a tennis player wanting to rate your player or yourself, you can download the PDF. No opt-in required. It is a free gift for you. 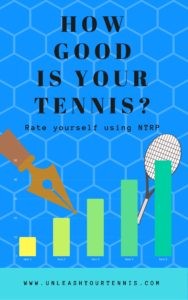 Print it out and bring it to the tennis court.

Once you know your rating, look at the characteristics of the next level and plan how to get there. Tennis is more fun when you are learning new ways to better your game.