It was the second lesson that I had with my tennis student, Naem, and we were working on the forehand technique (groundstrokes). I was hitting baseline rallies with him. During the break, as usual, I checked with him how he felt about his technique or whether there was anything that he felt was not right. He mentioned that his contact point was not as clean as he would like and he tended to feel a little late when hitting the ball (weak groundstrokes). Just as I was trying to diagnose the problem and propose some solutions to him, he commented, “I played a lot of cricket back in Bangladesh. Do you think those skills can be applied to tennis?”

Suddenly, an idea struck in my head. So, I decided to use cricket batting to help him with his forehand.

I said to him, “Yes. I think the skills are transferable to tennis. Can you show me how you prepare to hit the ball in cricket?”

He demonstrated, using the tennis racket, and he used two hands to hold the racket. He brought the racket up to his right shoulder and was ready to bat the imaginary cricket ball.

“Ok, look at your preparation. Your ‘bat' is up and the ball has not even been bowled,” I replied.

“In tennis, the ball is moving towards you at a great speed, so you can't afford to prepare the swing late,” I continued.
He understood what I was trying to tell him. He had the “ah-ha" moment.

Learning from baseball or cricket players

If you are a fan of baseball or cricket, you will notice how the batsman prepares to bat the ball. He will turn sideways, both hands bringing the bat up, and waiting to swing at the lightning-fast ball. You will never see a batsman facing the pitcher and then preparing the swing after the pitcher pitches the ball. 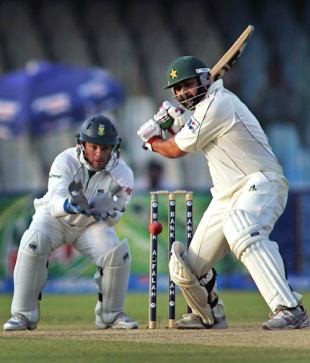 Watch how the batsman prepare his swing

What has this got to do with tennis?

In tennis, we can't be exactly like the batsman and turn the body sideways before the opponent hits the ball. We need to face the opponent so that we can react to the next shot which could be a forehand, backhand or even a drop shot.

In order to better prepare for the shot, we need to quickly identify in which direction the ball is going. You should be able to tell the direction when the ball is about the cross the net and is coming towards you.

A good preparation is when the opponent is just about to hit the ball, you perform a split step (the split step is another topic on its own which I am not covering in details here), turn the shoulder in the direction of the incoming ball and move in that direction. As the shoulder turns, the racket should be up before the ball bounces in your court. Once the ball bounces in your court, you should be swinging your racket forward to contact the ball. After you contact ball, you should be going back to your recovery position and getting ready for the next shot.

Watch how the pros hit

A good way to learn is to watch how the pros hit. In the video, I have included a short clip of Roger Federer warming up with his partner. In the slow motion video clip, observe his shoulder turn and racket preparation before the ball bounces in his court. He just needs to swing the racket forward to strike the ball. Every contact is sweet when he prepares the swing this way. 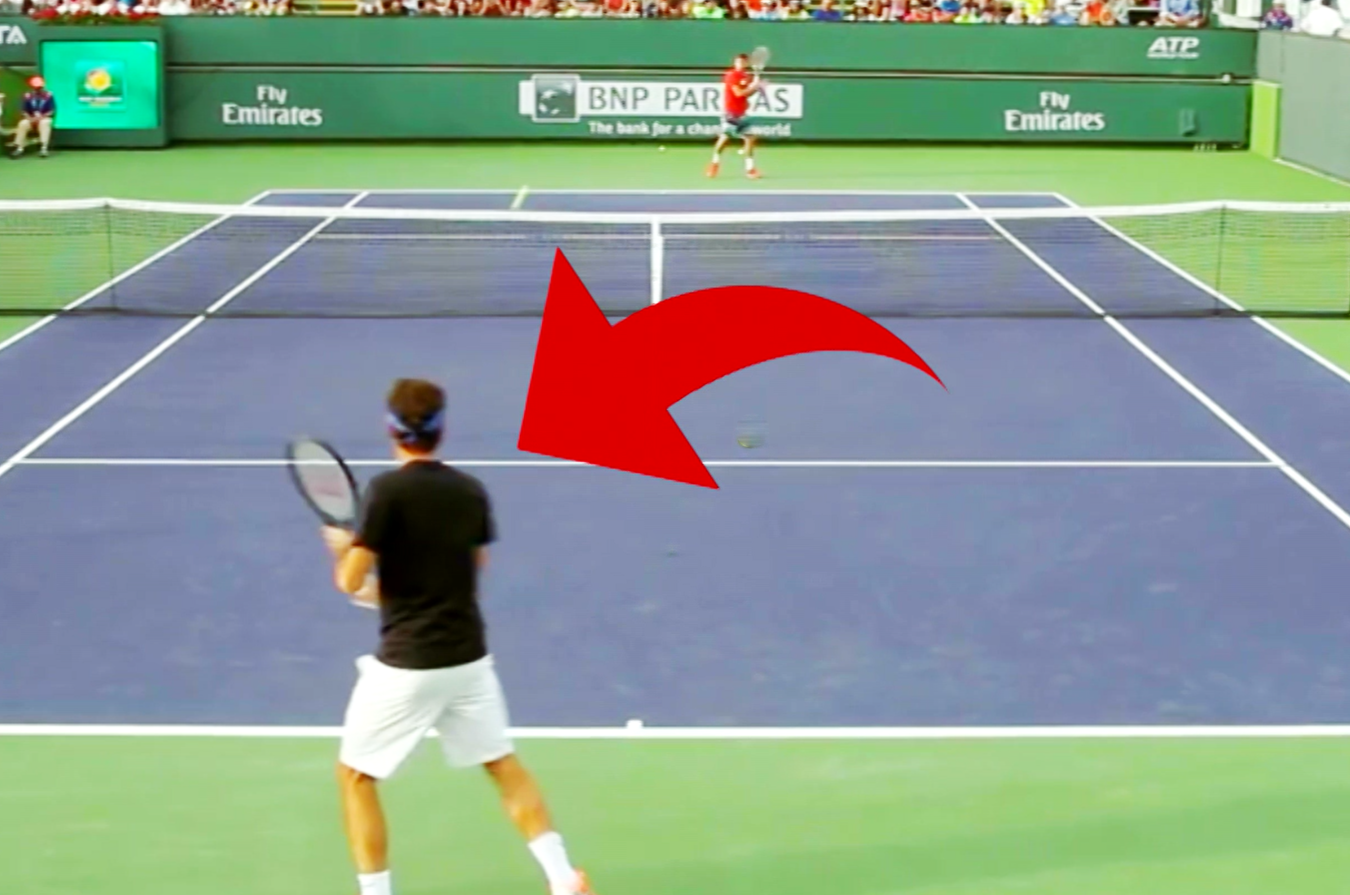 2 drills that you can use to practice

This drill involves you and a partner doing it together. It is an exercise where you can practice your reaction to the incoming ball.

Your partner can feed some balls to your forehand side. Start with sets of 4 balls. The first 3 balls will go into the net. You need to react quickly with the shoulder turn and the backswing when the ball reaches the net. The last ball will come to you, and you can practice hitting the ball over with better preparation. 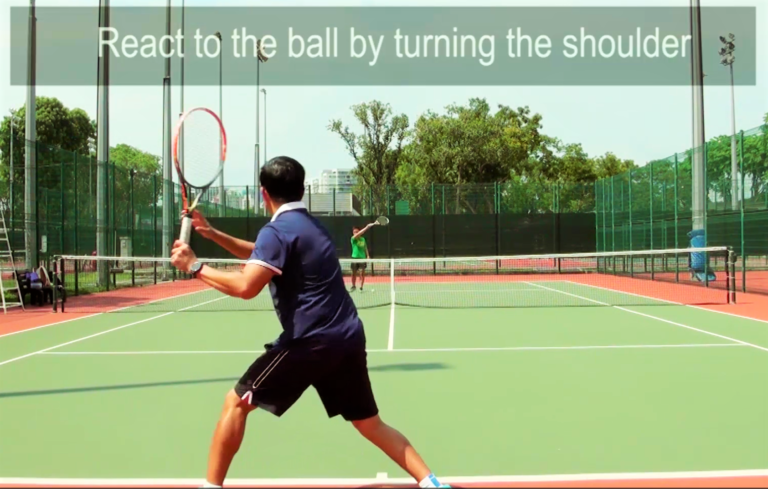 Do the same thing for the backhand. For more variation and more practice, your partner can feed random directions towards the net and you have to react accordingly. 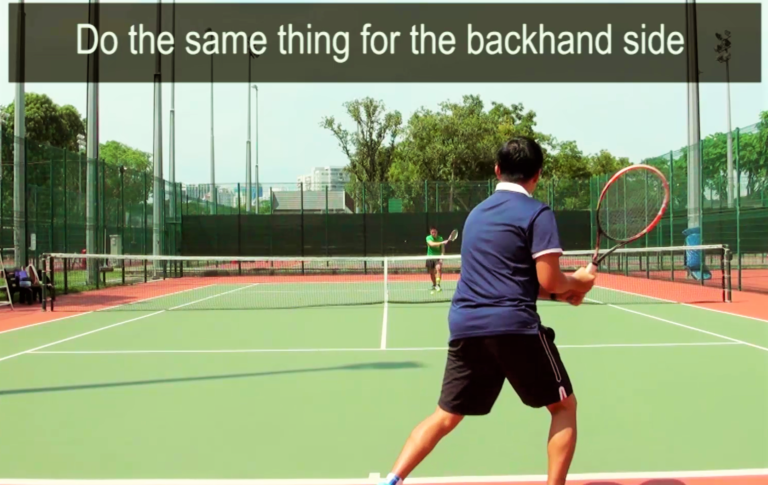 Do the same thing on the backhand side

The next drill is one of my favorite drills. I have mentioned this drill in my previous blog post on improving anticipation.
What you need to do is to call out “forehand” or “backhand” after your partner has hit the ball (groundstrokes). You should call “forehand” or “backhand” immediately the ball crosses the net. This is the time when you have identified the direction of the incoming ball, whether it is coming to your forehand or backhand.

The success of this drill lies in turning your shoulder to the forehand side or the backhand side, once the ball has crossed the net. When your shoulder is turned to the correct side, the preparation of the groundstrokes is clearly much better, compared to waiting for the ball to bounce in your court and then preparing to strike.

The ability to hit the tennis ball better, during your groundstrokes, relies greatly on your preparation. If you can prepare well, the solid contact will come naturally.

Go ahead and give the 2 drills a try. I'm sure they will help you to improve your preparation and your hitting.
Let me know about your results after implementing the two drills, by leaving your comments in the box below. I look forward to hearing from you.